And it was a really really shit day.

First of all, nobody panic, I am totally fine now. I just promised the whole truth in this blog, good days and bad days. Yesterday I went through the single worst bout of food poisoning of my entire life. Bar none.

After spending more time than most in Siem Reap and having an adventurous blast, I decided to head down to the really laid back island of Koh Rong and convinced a fellow Canadian to join me to catch some rays and waves. We took a night bus, which to me has only ever meant a bus at night. This one was a sleeper bus, with bunk beds and no seats. And the beds were tiny, so it was a good thing Tyler and I had met before this.

Getting pumped for 12 hours in this bus. 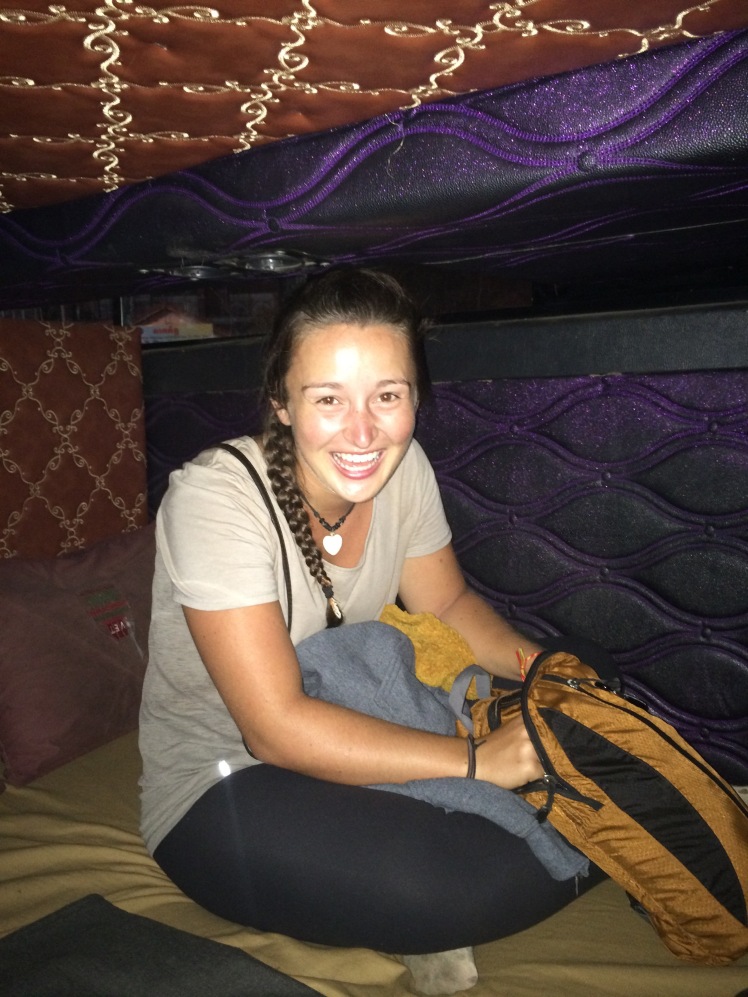 I thought it was just the funniest, evidently. I couldn’t help wondering what you would do if you were stuck in the same bed as 1) a stranger, 2) a fat stranger, 3) a fat and smelly stranger. Not half a minute after I had said this to Tyler and a laaaarge-bellied, wheezie Russian smoker came on with his slightly smaller buddy and those poor two had to share a bed. Guess you would just have to get really comfy really fast.

We arrived in Koh Rong with an aggressively sexual Italian dude who decided we three would room together and he would put a shell outside the room if we couldn’t enter – the beach town version of a tie or sock on the door handle. In order to shake Romeo (what I decided to call him and because we never actually learned his name that is what he will forever be called to me), Tyler and I went to the beach. Not 5 minutes after getting there, a little Cambodian girl grabbed my hand and started playing with me in the ocean.

We played for hours. Her father grabbed her for lunch and she came running back not 10 minutes later with rice still hanging out of her mouth, pulling me into the ocean for more. 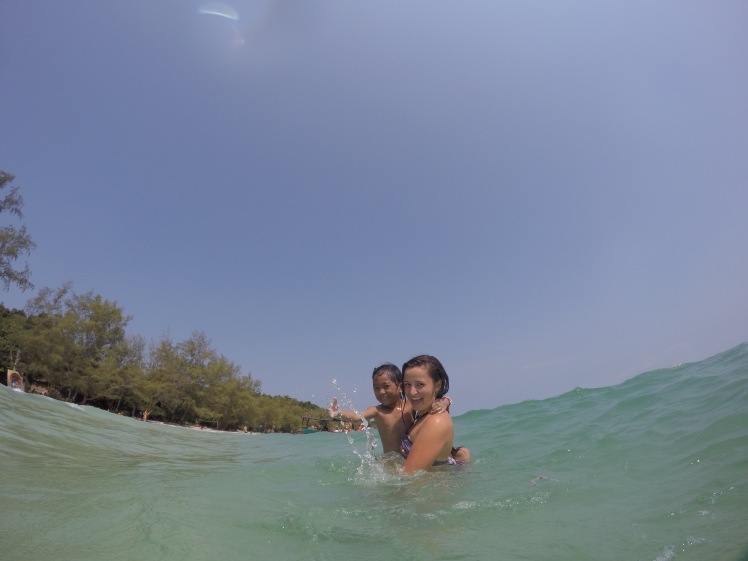 Once it hit about 2 pm I was so exhausted so I went back to my towel to nap. Psh. Sleep is for the weak am I right. I looked up a minute later to where Dina (the Cambodian cutie) and her family were sitting. Her dad’s friend could see me over a sign blocking most of my view of them but he was eying me so I waved, and he held up a beer. I believe my exact response was “Oh fuck yeah”.

So Tyler and I spent the rest of the afternoon / evening drinking beer with Dina’s father and his friends. They’re English was all quite good so conversation was easy. Beers led to an invitation by the police officer in the group to try Cambodian rice wine that evening with him and his friends. Obviously we went, after a ridiculously amazing pizza and a hammock nap.

We spent that night drinking homemade Cambodian rice wine from recycled water bottles, with cut off bottle bottoms as cups, with a group of local construction workers and police officers in a circle on the floor of a half-finished building. Before you ask, rice wine (at least this brew) tastes more like vodka than wine and is not my personal choice of beverage. But beggars can’t be choosers right. Plus there was food to chase the wine, mango chilly salad, raw banana with salt that made my face feel like it was shrivelling up and the single greatest hot sauce ever. Upon reflection, the “wine” was probably the cause of my downfall though it took a couple days to kick in. It was the Trojan horse of food poisoning.

The next couple of days were laid back just like the island, though Tyler had his own bout of tummy issues. We kayaked with yet another fellow Canadian to this little island off of Koh Rong, complete with its own temple.

The Trojan horse remained dormant until a couple of nights later when I had a curry that I had the nerve to call the best curry I’d ever had. The universe had other ideas.

I won’t go into gory details but I spent all night awake and sick. I was hoping it was just something my system needed to clear but every time I came back I felt worse. I had increasingly painful stomach cramps to the point that I was wincing and crying in a little ball on my bed. And we were supposed to take a boat that day to leave the island. As if. I couldn’t even stand straight let alone pack my bag, lift my bag and get on a boat.

So Tyler went and changed the ferry tickets, booked another night at our hostel and convinced me to see the nurse on the island, conveniently located across the road. She gave me two injections to stop my vomiting and pain and hooked me up to an IV for three hours to rehydrate. My first IV ever. In a hut on a beach in Cambodia.

Tyler was still enduring his own bout of food poisoning (I guess his Trojan horse wasn’t so cleverly disguised), so he and I were a mess and spent all day sleeping or sitting on the communal couch watching Jimmy Fallon videos.

After sleeping for 12 hours last night, we are both feeling loads better. Still struggling to eat rice but noodle soup is my godsend right now. Maybe no more homemade rice wine for us.. Or curry..

The good news is it took me three and a half months to have a bad day. Sure I’ve had days that just weren’t for me, but my attitude stayed positive the whole time. Even during this I tried to see some good in it, and found myself fascinated by the body at the beginning before the stomach cramps. The body is amazing; my heart was pounding, I was sweating and I was just lying in bed. My body was working very hard though. Props to my body for surviving the Trojan horse.

We live and we learn, right.