I’m often asked why I don’t fly to my destinations when they are particularly far away. My response is that for me, getting to the town is as much of an adventure as being in the town. And I’ve had so many adventures getting from one place to another, especially in the last three weeks as I travelled from southern to northern Vietnam and then into Laos.

After another encounter with Michael, more drunken (on his part), aggressive and sobby than we generally prefer, Tyler and I headed out of Ho Chi Minh to Dalat. Given that it was still Tet, and Dalat is a popular place for Vietnamese to go for it, everything was booked solid online. A friend of mine that I met in Koh Tao had wandered through 20 hostels and hotels the day before, only to find a kind couple who offered to share a bed so he could have a place to sleep. So Tyler and I mentally prepared to sleep in a park, as we had already booked our bus tickets and felt antsy to get out of Ho Chi Minh.

As far as bus rides go this one was pretty darn good. It was our first individual sleeper bus. Unlike the one we took in Cambodia where it was just beds on a bus, this one was an individual, fully reclining seat with a blanket and water. Swag.

Sticking true to my travel theme of this trip, the bus dropped us off at 4:30 am at the bus depot. We had no idea where we were going to go or how we were going to find the main backpacker bit of town. And it was so cold. Before you Canadians laugh at me, it was actually cold. Like we could see our breath, and having just come from Ho Chi Minh where it was 30 degrees, that was quite the shock. 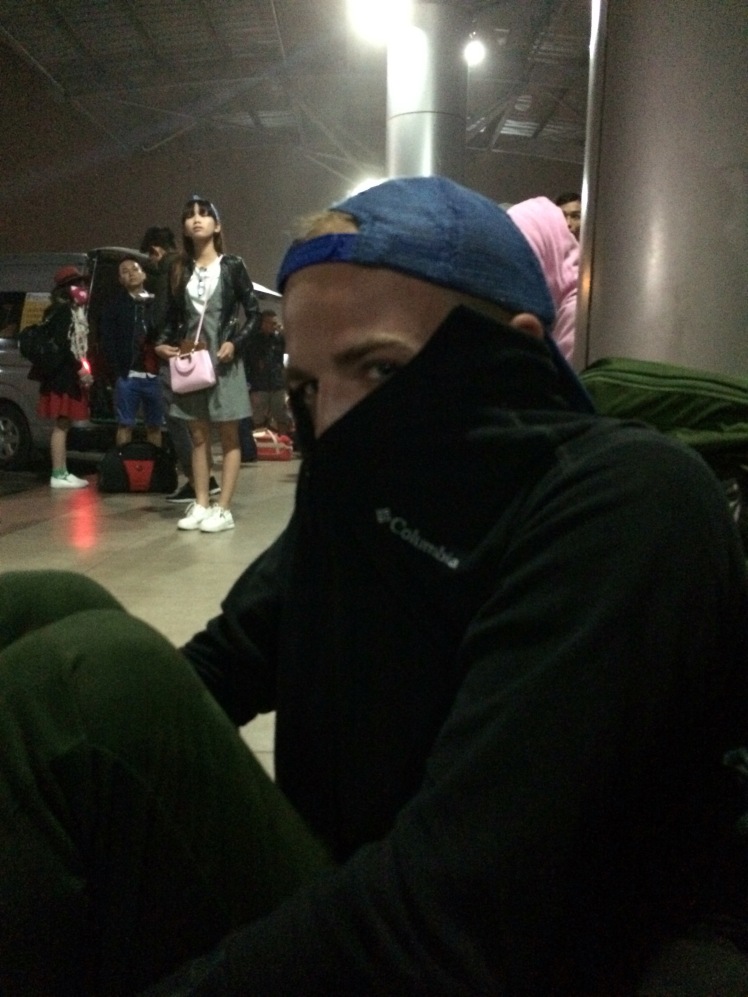 Tyler freezing his ass off, wishing he had a marigold monk toque like me

We met a Dutch girl who had a hostel booked, so we tagged along with her in a minivan to see if they had room for us. Dalat at 4:30 am is a very eerie place, foggy with hilly, twisty, turny streets. We wandered the streets and back alleys (where I half jokingly said we were going to meet our end) looking for this hostel and finally found a tiny sign leading to it. Go figure, it was closed. So we kept wandering around the unconscious town finding the few places with signs or lights on, only to have them shake their hands at us and tell us they were full.

By 5:30, we were running out of options and hotels to try. I saw one that looked really fancy but we were getting desperate so I tried it. This man, this legendary man inside told us he was full but we could stay there, have some tea, use the wifi and sleep until it was a more reasonable hour of the day. What a beauty. 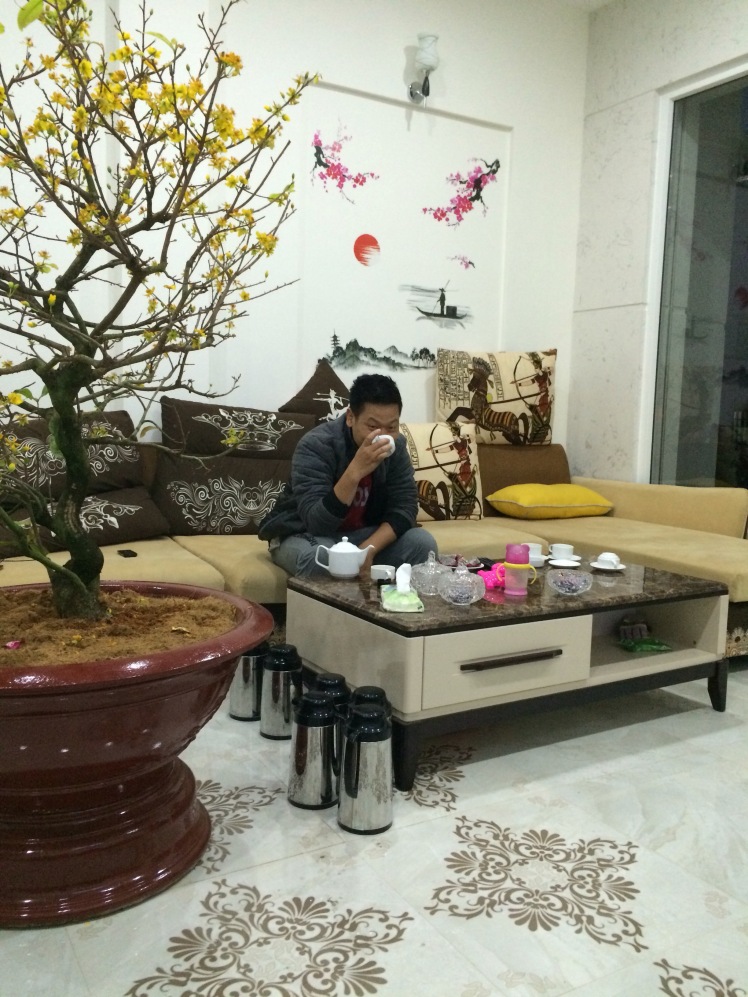 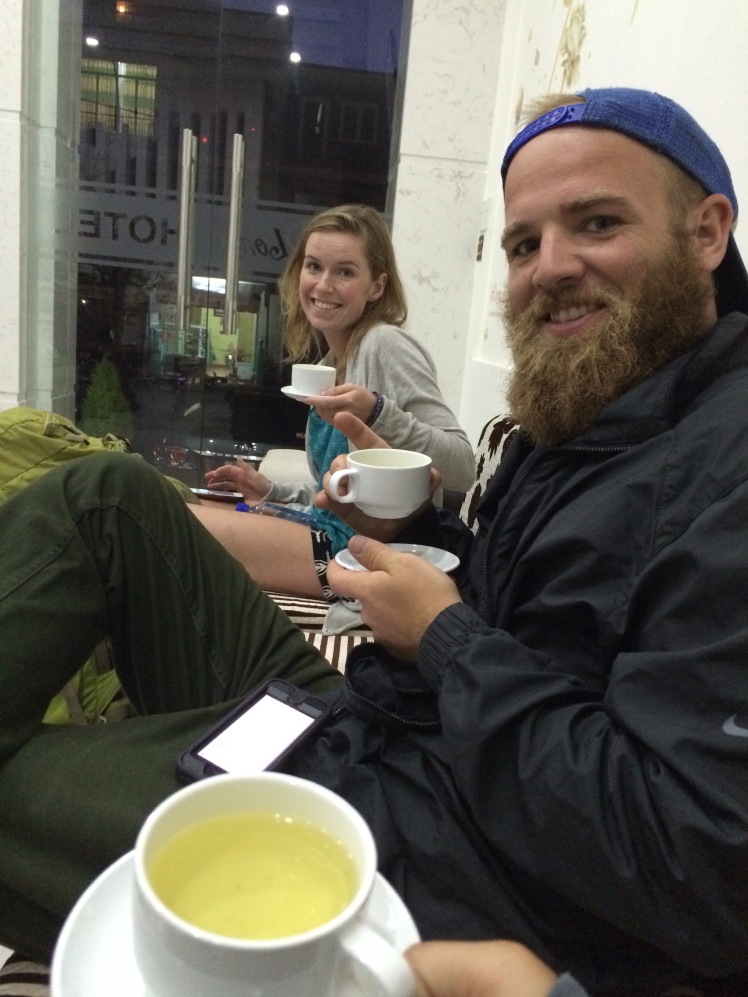 Once it was a more reasonable hour (7 am), we popped across the street for some noodle soup and mentally prepared to spend all day looking for a place to sleep or a park.

Thankfully it only took 5 or 6 places before we found one with a room (after this one tiny woman tried to barter rooms, saying we could only have a room if we stayed two or three nights). We had to climb a million stairs at the place we snagged but the view at the top was so worth it. 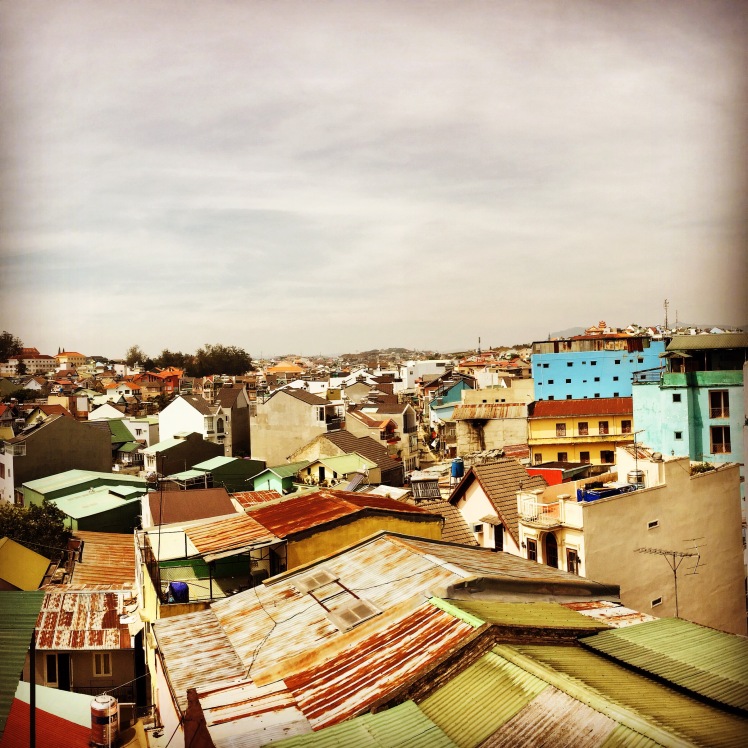 Tyler and I explored the town in the couple of days after that, finding amazing coffee shops, music stores, art stores and local delectable food. We met up with Robby, my roommate in Koh Tao three weeks before, and his friend and saw the aptly named Crazy House (one of the ten craziest buildings in the world!) 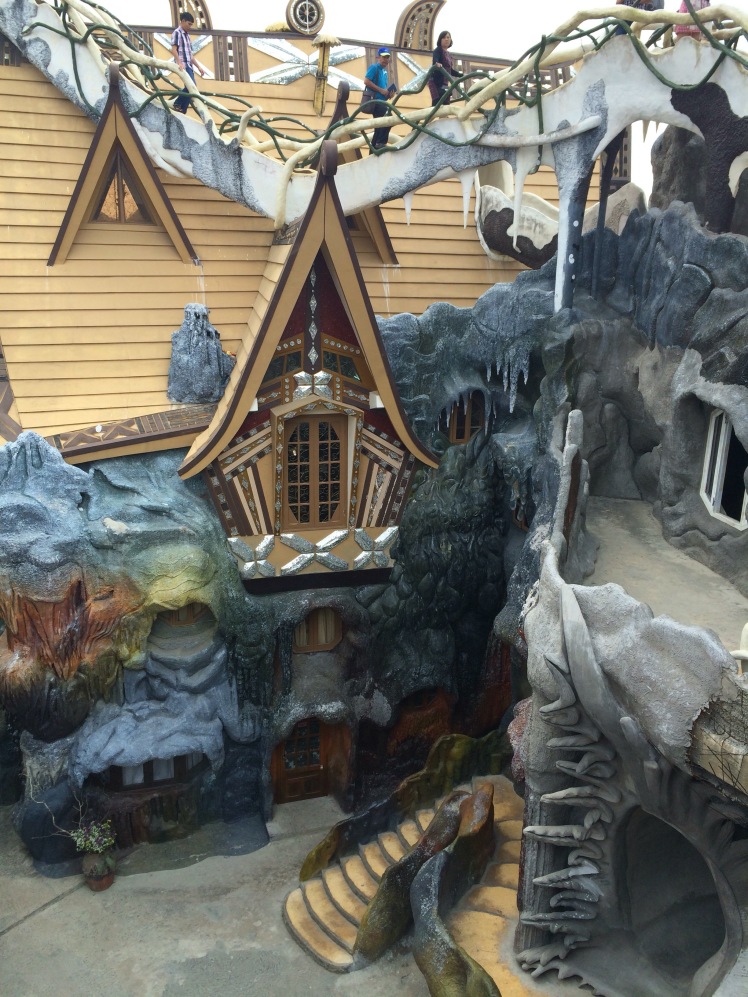 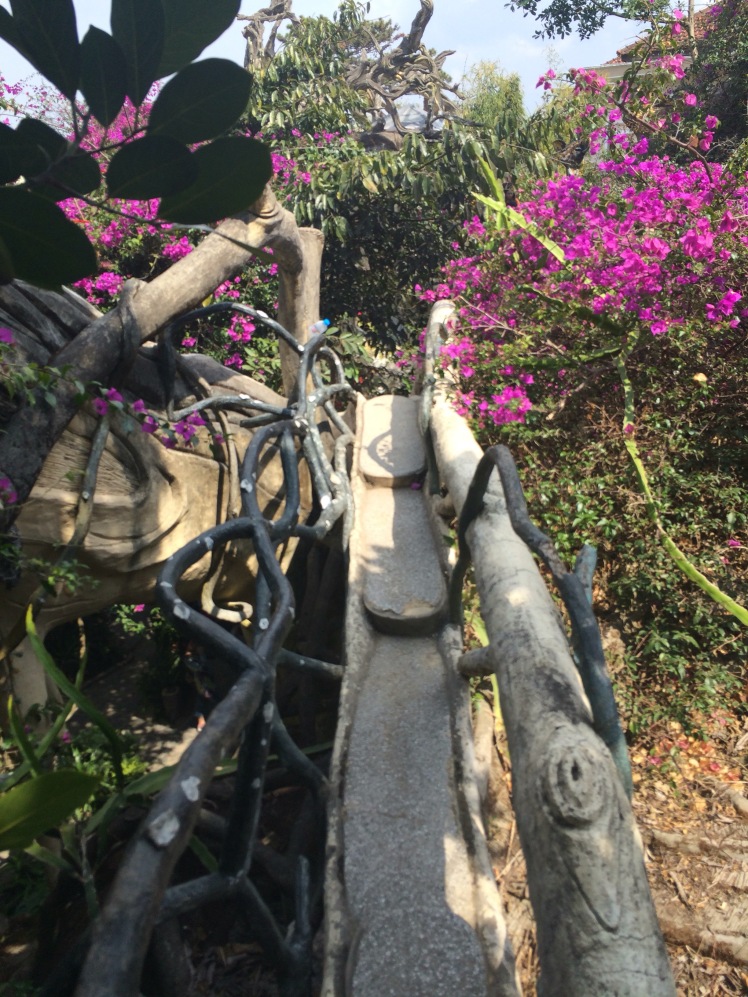 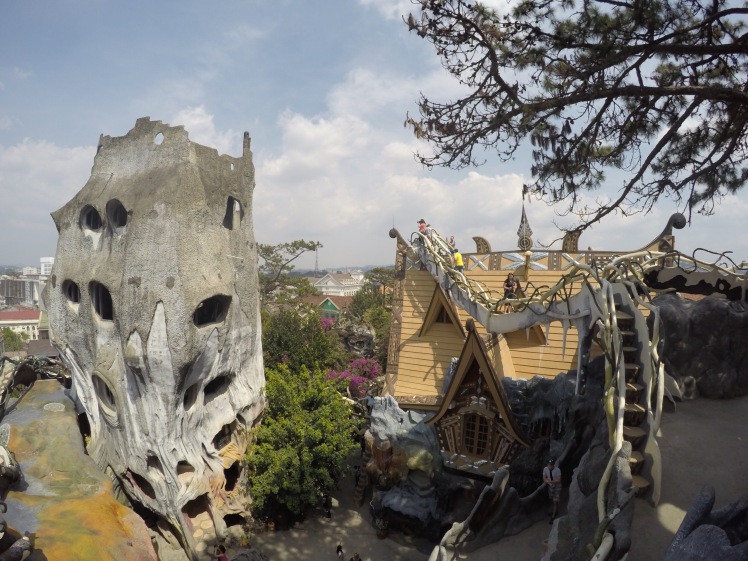 That night we managed to find this hole in the wall bar that all the backpackers were talking about and saw what all the fuss was over. It’s a maze, cave bar. So you drink, explore the rooms, get lost, run down rabbit holes, find your way to the roof tops and celebrate with the others who made it. 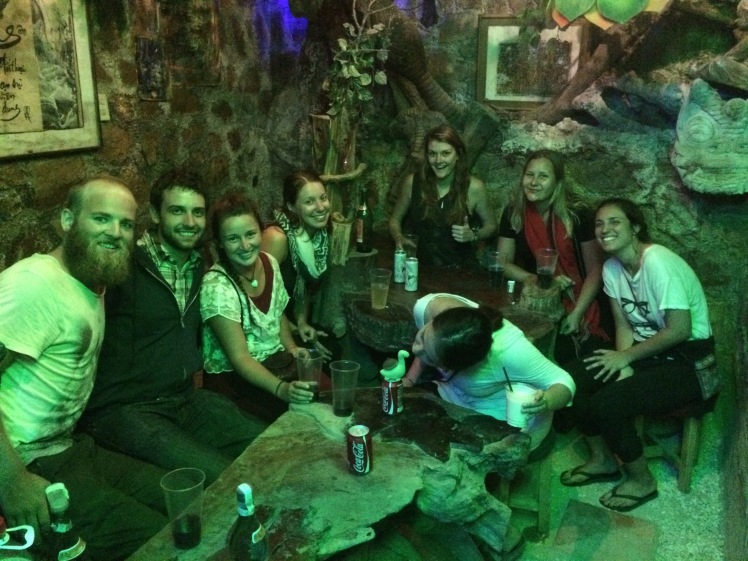 We’re all Canadian in this photo, including the little snail on the table who is going around the world meeting people (#sheldonmeetsworld) 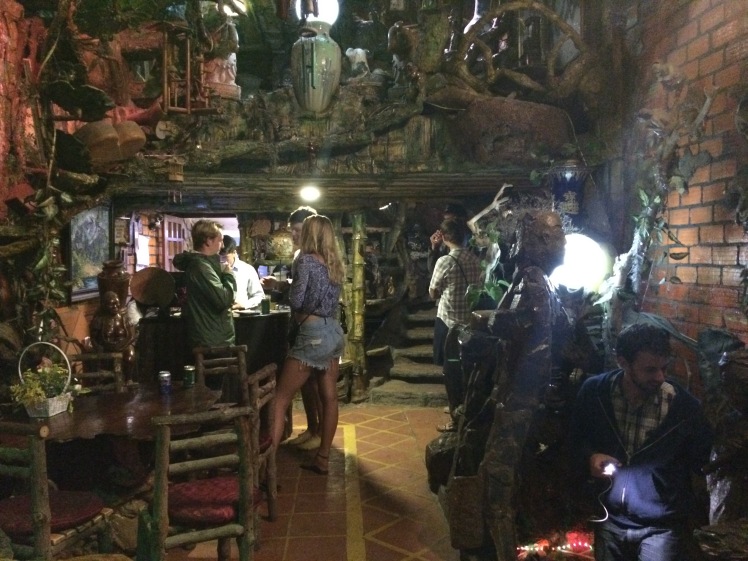 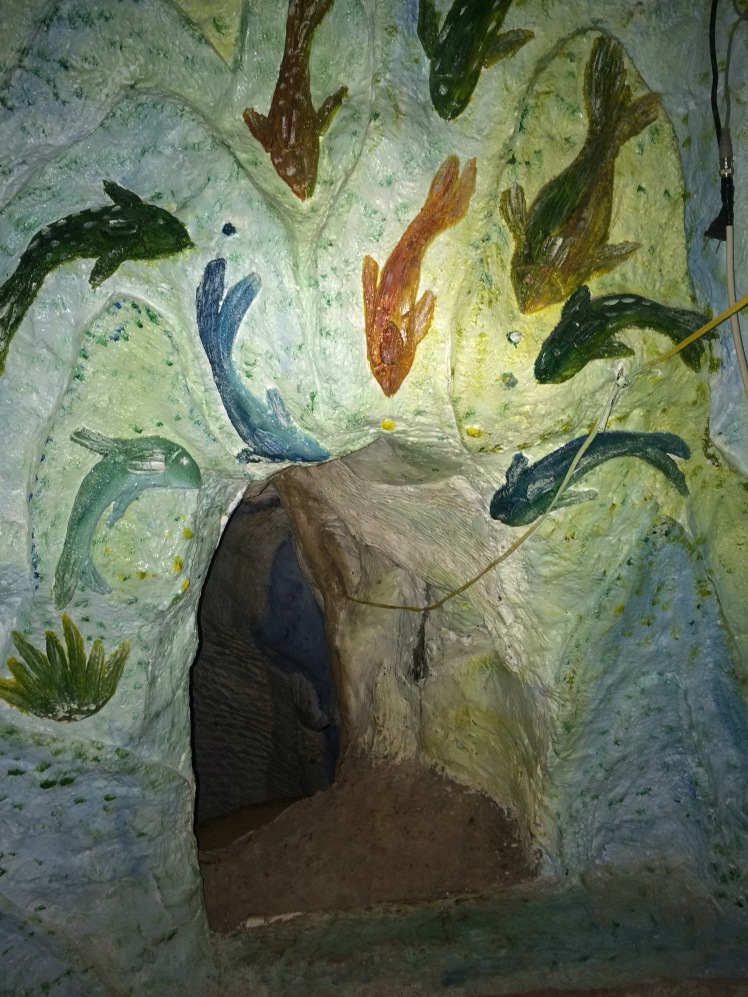 The bar closed down at 12:30 and we wandered back to our hostel only to find the doors barred shut and locked. We tried all of the keys on our chain and tried the back door, all to no avail. So we stood outside, looking around like

huh.. Okay now what.. Again mentally preparing to sleep outside. Thankfully our wracking on the bars woke up the hostel keeper and he let us in. From then on we made a point of seeing if hostels have curfews or not. We wanted to go from Dalat to Hoi An which is central Vietnam, the city famous for its custom tailoring. All of the buses were full, so we decided to take a bus to another town and either take a bus right out or stay the night if everything was full.

After taking our first motorbike taxis with our big backpacks and being dumped at a very fancy hotel supposedly in the city centre, we went to a cafe for breakfast, wifi and to recharge a little bit. These places have been my saving grace while travelling, and I thank all of them for feeding me, letting me use their wifi and generally overstaying my welcome.

Hoi An was an enjoyable and smooth time, nothing crazy, minus playing speed with Tyler whose little rabbit heart just couldn’t handle the stress and I don’t think I’ve ever laughed harder as words tumbled out of his mouth at an alarming rate. We explored town on bikes, got tailored clothing and played games with fellow travellers. 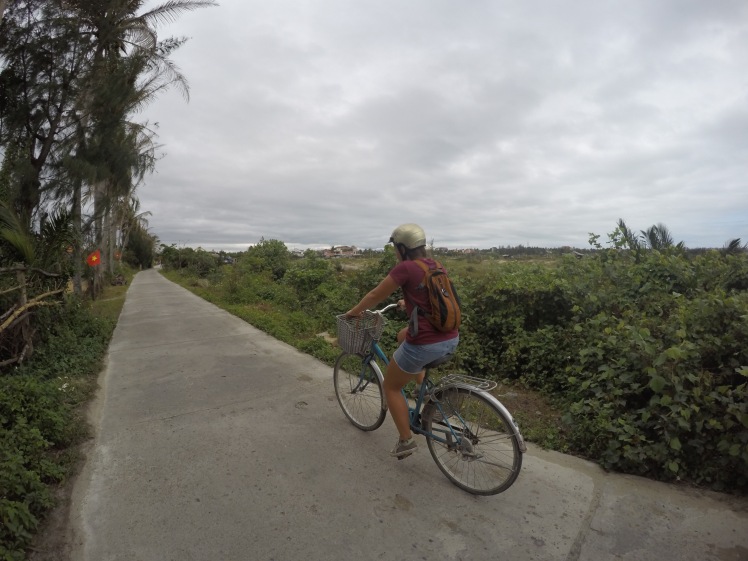 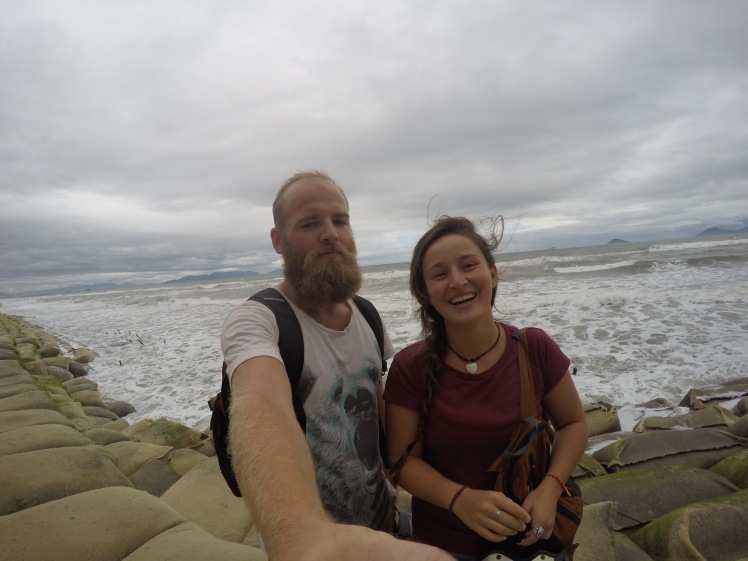 Tyler having a great time at the beach 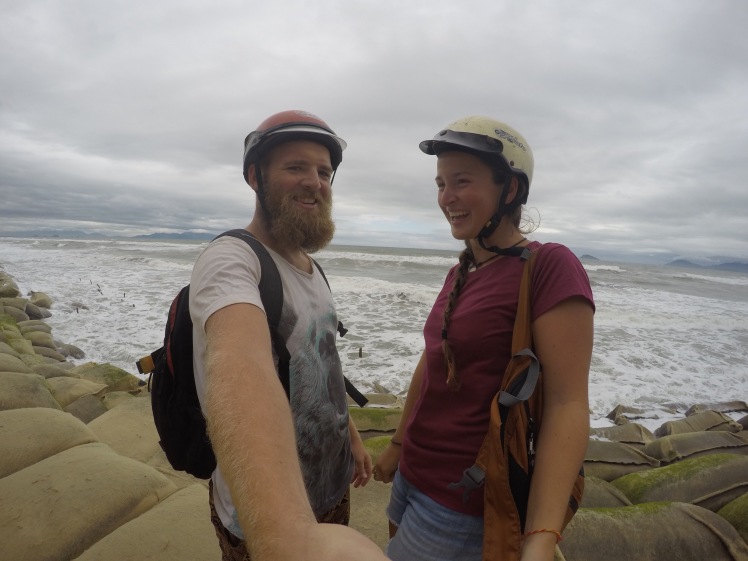 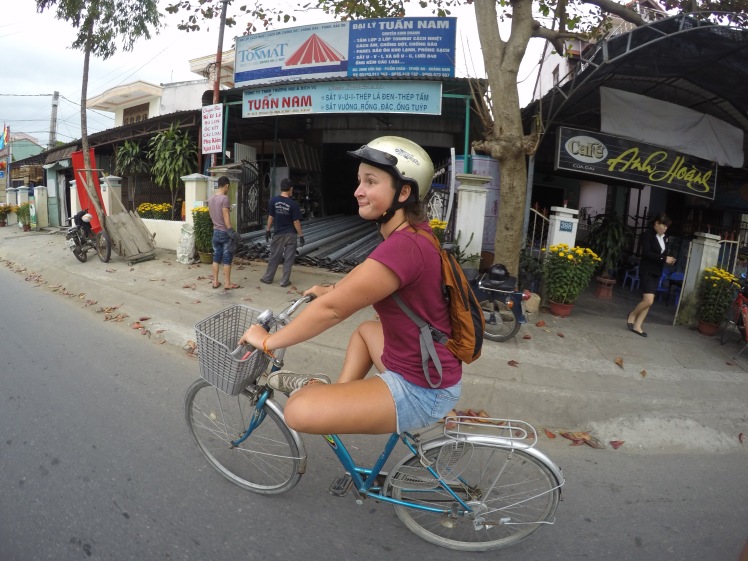 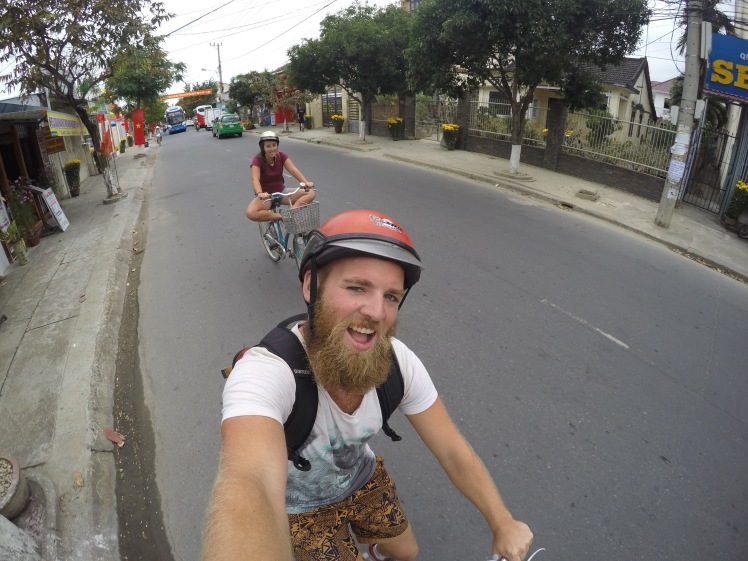 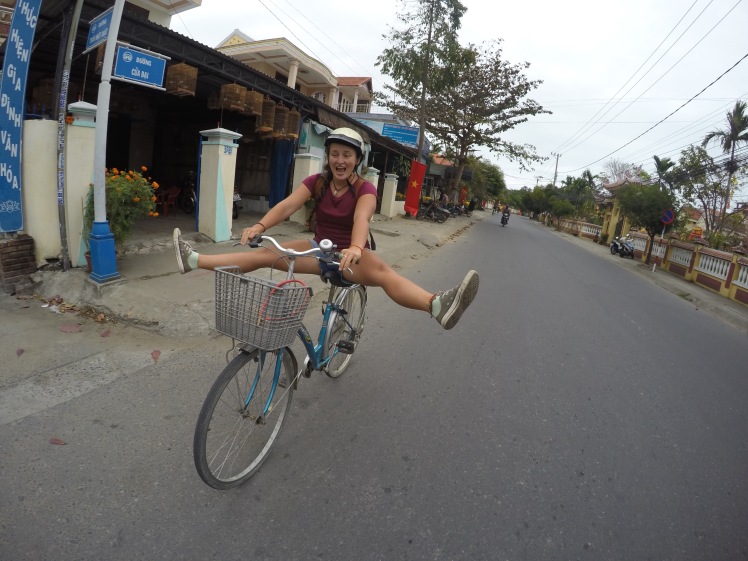 After Hoi An we wanted to see Phong Nha, the national park famous for its caves (home to the biggest cave in the world but it costs $3,000 to see it, slightly out of my price range). Travel agents quoted us 500,000 and 600,000 dong ($25-$30) which is appallingly high given that it was only 6 hours away. So we took a minibus to the big town an hour up the coast and then a train to the town close to the park. We ended up staying there in Dong Hoi because there were no buses and the hostel we found was sweet, and we went to the famous caves from there. 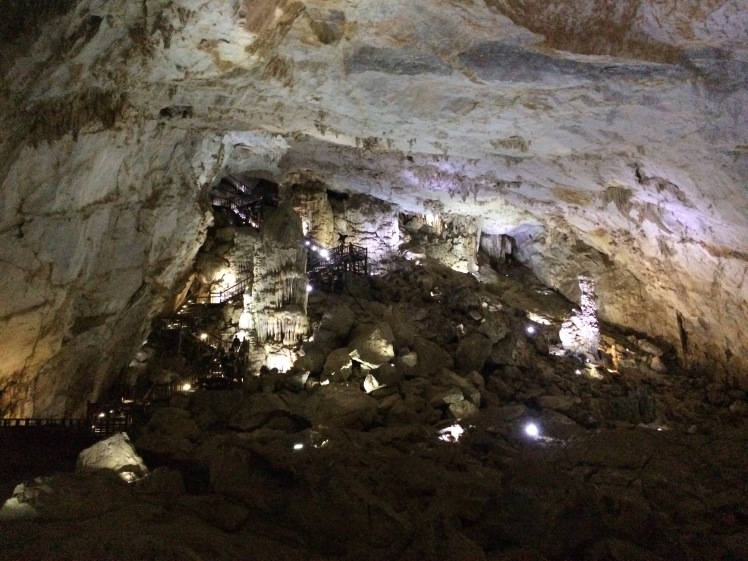 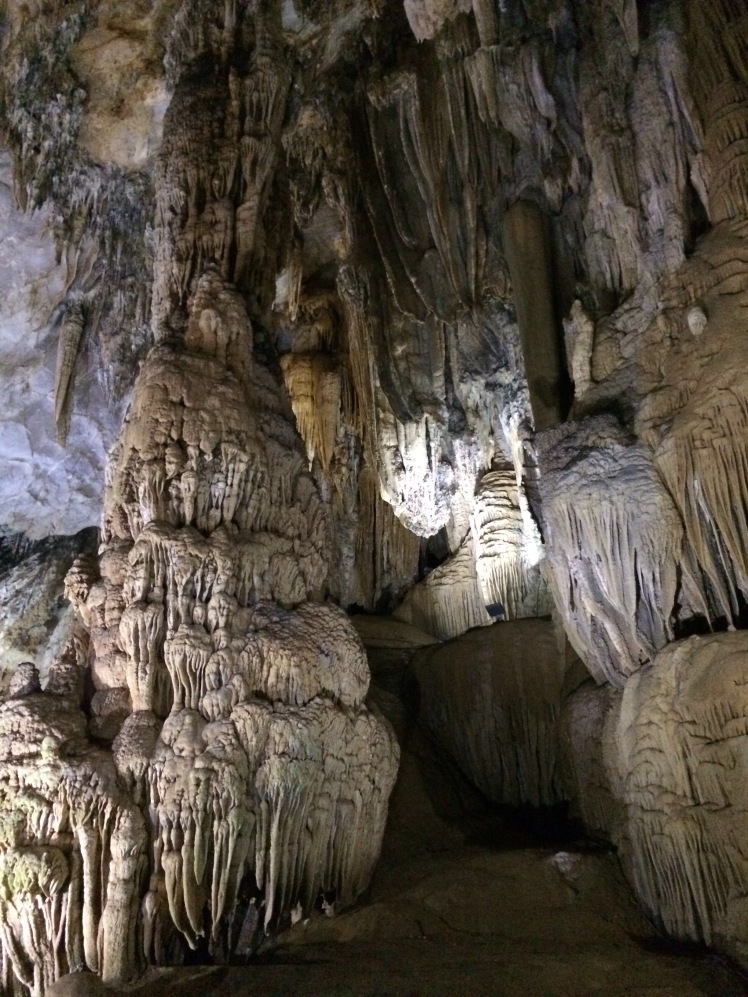 The next stop was Hanoi by sleeper train. Having not booked in advance, we arrived at the train station 3 hours early (aggressive but instructed by our hostel keepers). The soft beds were all booked up so we got “hard beds”, and had no idea what that meant. Plank of wood was my pessimistic guess.

The train was delayed by almost 3 hours so we passed the time by playing cards (where Tyler lost brutally and the Vietnamese girls watching were giggling as he held at least half the deck), sleeping and trying to stay warm. By the time the train came I could have slept on the floor (and I had already been doing so at the station), so the mattress bed was a welcome sight. 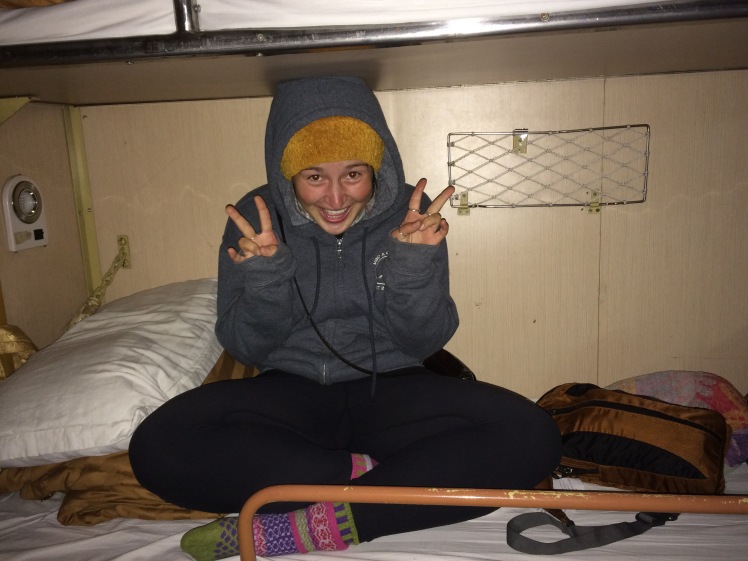 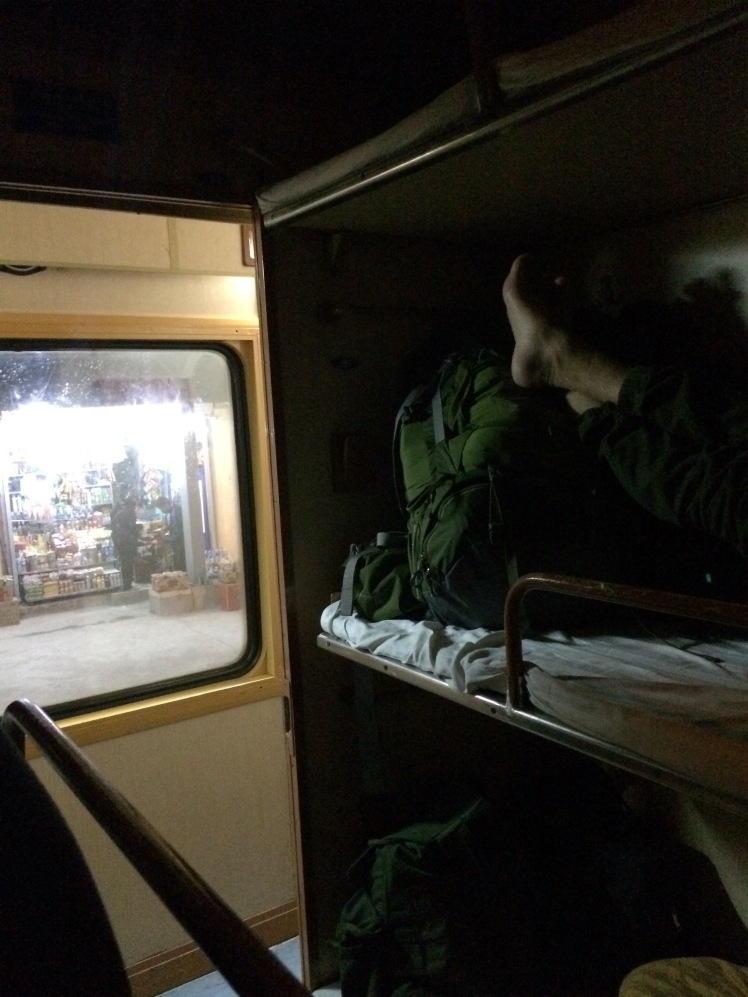 On these trains they let you know it’s morning and you’re approaching a stop with electronic tinny dance music. This train’s tune of choice was happy birthday, over and over and over.

Our stay in Hanoi was busy running to and from other places, with crowded buses, and budget boat tours of Halong Bay and a sleeper bus to Sapa where we arrived at 4 am and the driver actually let us sleep in the bus until 6:30, sheltered from the pouring rain and single degree weather. What a beauty.

Getting my tan on in Halong Bay

Now onto the journey that is the namesake for this blog post: my (now solo, as Tyler is sticking around Vietnam) journey from Hanoi to Vientiane, Laos. Normally it’s supposed to be 20-23 hours (already crazy long), but this one ended up being just shy of 30.

The first 12 hours were uneventful albeit snug and I woke up at one point basically being spooned by a total stranger so I snuggled the window as much as I could to get his head and legs off me.

Photo of us all on the bus

At about 5 am the bus stopped and shut off so I figured we were at the border and needed to wait until it opened. So I slept and then it was 7:30 and we were still stopped. I got a whiff that something was going on so I got off the bus and realized that no, we were not at the border. We were on a small road where a transport truck had crashed with the cargo bit precariously dangling off the edge of the cliff and the trailer taking over the road.

It took 5 hours to sort this out, with a crane coming, not having enough rope to wrap around the cargo cart to right it, police apparently taking suggestions from the onlookers (hundreds of Vietnamese men, some women and us 11 foreigners), motorbikes, cars and small trucks squeezing through to get past and the crane almost tipping over when they finally righted the truck.

Once the truck was off to the side, dozens of buses raced to the border to try to beat the mass of people who had all been waiting. The process to stamp out of Vietnam was pushing, shoving chaos. Like the line to the three outhouses at a music festival. I tried to stand my ground and get our passports in, amidst being shoved and yanked to move out of the way. I just kept repeating “I’m not moving” mostly out of principle because they couldn’t understand me.

We followed a guy who seemed in charge from our bus as he physically walked us across the border, and we were making jokes that we were illegal immigrants about to be shot down or carted off to jail.

We got our visas easily and hopped back on the bus for another 4 hours. We all figured we were almost there when we stopped for food, minus Adrian with the offline map who told us we had at least another 4 hours left. So we ate our incredulity with rice and soya sauce and melted back into our seats on the bus, squirming every 10 minutes for the next 5 hours.

But we made it, finally, celebrated with dinner at the hostel and slept in a bed, with a blanket and without bumping elbows with anyone.

These stories are my favourite and are the reason I prefer ground transportation (and because eventful flights are generally terrifying). They say it’s not about the destination, it’s about the journey. I’m pretty sure that’s a metaphorical quote but I also take it quite literally.

One thought on “I watched the sun set, rise and set again from the same bus window”